Two nature writers, from different countries writing in different eras. Both were long dead and forgotten; their reputations languished, books long out of print. The last decade has seen the profile of each rising beyond what could ever have been expected in their lifetimes.

Nan Shepherd and JA Baker: authors of the two finest works of nature writing of the last century: The Living Mountain and The Peregrine, respectively.

The Peregrine won the Duff Cooper Memorial Prize when published in 1967; Baker also published The Hill of Summer (available bundled together with The Peregrine in some editions) and nothing more. When Kathleen Jamie wrote the review of Baker that relaunched him into public consciousness, he had been dead twenty years and had seemingly left no autobiographical footprint:

“What will date this book – other than the quivering intensity – is the author’s self-eradication. JA Baker tells us nothing of himself. In a literary climate which encourages revelation or confession, it is strange to read. Who, we wonder, is JA Baker? A glimpse is all we get before he dips back into cover. Has he no job, no family? No sense of humour? Is this book non-fiction at all? He knew his birds, he watched birds, and he enables us to see them too, that’s all we can say for sure.”

Countless books are published, win a prize but still fall into obscurity: The Peregrine‘s fate – unlike the bird – was not rare. The Living Mountain‘s publication history, on the other hand, is bizarre.

Nan Shepherd’s fame was modest, and rested on three novels published between 1928 and 1933 set in her native north-east. These novels (now back in print) showed a pioneering use of “Scots language and idiom”, were well received and prompted one reviewer to rate her as “a novelist to put alongside Virginia Woolf”: no small praise. Hugh Walpole wrote of her “poetic descriptions of nature…a real addition to English literature…honest, courageous and unsentimental”. A volume of poetry – In the Cairngorms – followed in 1934. After that Shepherd would publish nothing, other than magazine articles, for over forty years.

Even in an age before today’s relentless self-publicity Shepherd was reticent, hiding her light under a bushel. This may well have contributed to her works falling out of print by the 1960s. As Charlotte Peacock writes in her biography of Shepherd, she had “disappeared from the literary landscape and been forgotten”.

In 1941 she wrote her final long-form work, an unclassifiable piece of writing. Autobiographical, spiritual, philosophical, The Living Mountain was, in the words of her close friend Neil Gunn, “the sort of book publishers are shy of”. Shepherd presumably agreed, and put in a drawer where it remained for 30 years. 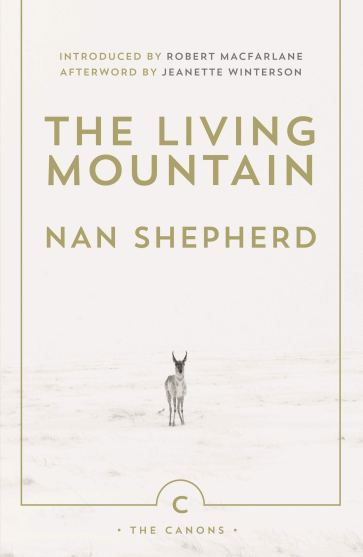 The then-tiny Edinburgh house Canongate published it, in a print run of 3,000 in October 1977. Peacock notes that by this time, “the world had caught up with her”. The book’s spirituality struck a chord with a post-60s generation. Travel writing (of which it is a form) also saw a mid-1970s boom with important works by Bruce Chatwin and Patrick Leigh Fermor being published. The time may now have been right for it but in keeping with Shepherd’s low profile, the book received little fanfare. It slipped from view, though those few souls who encountered it embraced it with a passion (one such was Jim Crumley, about whom more in a future piece).

The Living Mountain is unlike any other work of nature writing, as sui generis as The Peregrine, and this explains their hold on the contemporary imagination. The book is radical in it’s treatment of mountains not as merely summits to master (a particularly phallocentric view of landscape), but as worlds to explore in depth: positing an anti-hierarchical and multi-dimensional – rather than purely vertical – view of them.

One of Shepherd’s poems, ‘On a Still Morning’, captures something of the “intuitive insight” of the Zen state of satori she was trying to capture:

“So if I bend my ear

To silence, I grow aware

The stir of sounds I have always heard

That are not quite there”

Shepherd treats silence as something holy, noting – with the patience expected of a devotee of Buddhism – the difficulty of attaining mental stillness. Mountains, and the Cairngorms in particular, are a source and a scene of mystery, many – but not all – of which will be revealed by humility and patience.

Yet The Living Mountain, too, fell out of print. Robert MacFarlane, an important voice in bringing to light forgotten authors and works that speak to this moment in our environmental crisis, deserves many of the plaudits for bringing the book back into public consciousness. He has made a BBC4 documentary about it, and wrote the introduction for Canongate’s beautiful current edition. But little was publicly known about Shepherd’s life and the hinterland that could give birth to such a work.

Similarly, JA Baker¹ was merely a name and a figure trying hard to embed itself in the (we assumed) Essex landscape. In response to our desire to know more of these obscure figures, the last few years have seen the publication of biographies: Charlotte Peacock’s Into the Mountain: A Life of Nan Shepherd, and Hetty Saunders’s My House of Sky: The Life and Work of JA Baker².

Peacock’s work is impressively researched, and does a great job of evoking the douce atmosphere of early 20th century Aberdeenshire. Where it walks on unstable ground, though, is in it’s reading back from Shepherd’s fiction into her life, drawing conclusions from the characters in her work about her own relationships. As a biographical technique this is questionable as it doesn’t allow for the transformative power of the writer’s imagination, although given the scarcity of primary sources Peacock’s decision to use this method is understandable. Into the Mountain really hits its stride in the late 1920s and the dawn of the Scottish Renaissance. It’s great to see a previously little-known author revealed as a major voice in Scottish Modernism.

Final confirmation that Shepherd had gained a foothold in the nation’s consciousness was her appearance on the Royal Bank of Scotland’s new £5 note, released in 2016. After the unpleasant controversy about women being portrayed on Bank of England notes, it’s good that there was no such protest in Scotland, especially given that Shepherd is nowhere near as famous as (say) Jane Austen.

This article tells the story behind the redesign of the notes. RBS may have been complicit in the global financial crash whose aftermath we are still in, but give credit where it’s due: they’re the most beautiful British banknotes I’ve ever seen. There’s been no such recognition in England yet for JA Baker – is The Peregrine simply too strange for the average reader to take its author to their heart?

¹ MacFarlane – along with Kathleen Jamie – was key in proselytising for The Peregrine and wrote an introduction for that work too.

² Published by the ever-excellent Little Toller

Jamie, Kathleen: review of The Peregrine, retrieved from BirdForum.net (I remember reading it at the time but can’t recall where or when: The Guardian in the early 2000s?)

Peacock, Charlotte: Into the Mountain; a Life of Nan Shephard (Galileo, 2017)

Published by Into the Gyre

writer of the dark & weird, at the edge of Edinburgh. View all posts by Into the Gyre